Where are my Visual Studio Android emulators?

I'm just starting Jesse Liberty's new Pluralsight course, "Building Your First Mobile Application with Xamarin.Forms and Visual Studio 2017" and I'm running into a problem right out of the gate.

In the video, Jesse creates a new Xamarin.Forms project, modifies the XAML a bit, and runs it. Here is a screenshot of his list of emulators: 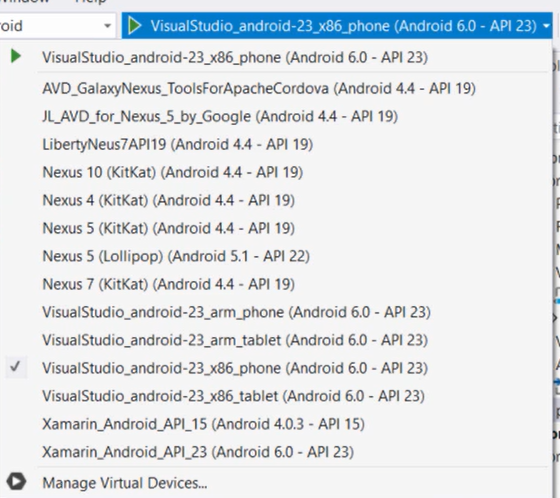 I've disabled Hyper-V, and installed the latest Intel HAXM. I've followed along step-by-step, using the latest version of VS2017 (installed yesterday, no updates available), and I've used the Android SDK Manager to install the SDK Platforms APIs 23 - 27. More specifically, I've installed every available option for Android 6 (API 23), which is what shows in Jesse's list.

I have set the following Android project Properties:

When I open the dropdown, I don't even see the VisualStudio_android emulators at all, and I'd assume they come preinstalled with VS2017 when I install Xamarin, but no:

I have no idea where to get the Visual Studio emulators; but, as I understand it, they run much faster than others so figuring this out will probably be worth my time.

The Android Virtual Device (AVD) Manager doesn't list the VS emulators, so I can't add them from there. I know there is an Android emulator from Microsoft but it says it's Hyper-V compatible, and I've just disabled Hyper-V to use the other emulators. Is this a good choice? Are these the emulators I'm missing?

It turns out, the emulators weren't installed for some reason when I installed VS2017 and the Mobile Development Workflow.

I went into the "Individual Components" tab in the Visual Studio Installer, checked the emulator boxes, and all the emulators show up fine now.

Try uninstalling visual studio and then installing it again (save your projects first) and make sure that you install the Microsoft Visual Studio Emulator for Android. Check everywhere in the installation guide (Specifically under Cross platform mobile development). You might have missed it during your installation process.

They have been renamed to streamline development. We only install a minimal amount of emulators. They used to be named visualstudio_ and now just android_ but you can create as many as you want.

I use intel haxm x86 emulators from google.